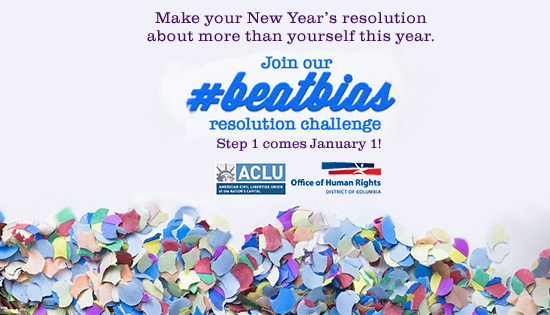 As we start 2016, we encourage you to choose a New Year’s Resolution that is about more than just you. Join the District of Columbia Office of Human Rights and the American Civil Liberties Union of the Nation’s Capital in taking the #BeatBias Resolution, which will help you understand, identify and address unconscious bias in eight steps. We will release the first step on January 1, 2016 at 10am on Facebook, and release the next step each day after at the same time and place.

Call us optimistic or naïve, but we refuse to believe that we cannot change society into something new. It starts with each of us understanding and addressing our own bias, whether it is related to someone’s race, ethnicity, sex, religion, sexual orientation, gender identity or other characteristic. Last year’s civil rights advances and backslides, as well as tragedies here and abroad, can lead to insecurity and mistrust toward communities and each other if we are not careful. Just like six-pack abs, you’ve got to work to identify and address your unconscious bias, and we’ll walk you through it starting January 1.

Step One (January 1st): "No offense, but you have unconscious bias, and so do we."

Step Two (January 2nd): "Are these stereotypes affecting me?"

Step Five (January 5th): "Swallow your pride and sip on some knowledge."