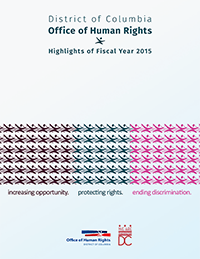 “This was a transformative year for our agency. We received an unprecedented number of inquiries from the public, began enforcement of new civil rights laws, and expanded our outreach efforts to new issues and communities.”
- Director Mónica Palacio

OHR's fiscal year 2015 was marked by the enforcement of new laws, a substantial increase in the number of discrimination cases docketed and innovative policy and outreach work.   with The agency saw a 113 percent increase in the number of discrimination cases docketed, mostly attributable to our enforcement of the Fair Criminal Record Screening Amendment Act ("ban the box") beginning in December 2014. Our Highlights of Fiscal Year 2015 report provides details of these cases and others, and looks into the proactive work of the agency. Highlights include:

We are proud to share these numbers - and our Highlights of Fiscal Year 2015 report - with you. We appreciate your support of our work, and will continue to fight to end discrimination in the District.