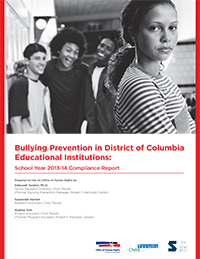 The Robert F. Kennedy Center for Justice and Human Rights’ bullying prevention initiative, RFK Project SEATBELT (RFKC) was contracted by the DC Office of Human Rights (OHR), in June 2013, to provide resources and support for DC public and public charter schools’ bullying prevention efforts. This contract moved to Child Trends in August 2014. From August 2013 through September 2014, an audit of each local education agency’s (LEA) anti‐bullying policy was conducted to determine the extent to which it is compliant with the 2012 Youth Bullying Prevention Act (YBPA; DC Law L19‐167).

All LEAs were asked to submit their policies in September 2013, in accordance with the requirements of the YBPA. Submissions were accepted until September 30, 2014. Each submitted policy was reviewed, and a report of compliance was provided to the LEA and to OHR. Policies that were resubmitted were similarly reviewed. This report summarizes the current state of LEA compliance as well as the most‐often overlooked or missing required components in initially submitted policies.