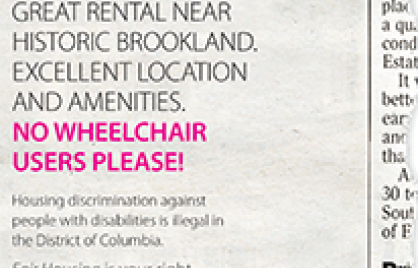 (WASHINGTON, D.C.) – The Office of Human Rights (OHR) is launching its “Fair Housing Is Your Right” advertising campaign today in an effort to reduce housing discrimination and increase reporting of it in the District of Columbia. The classified-style advertisements use discriminatory language to educate District residents about five protected traits under the DC Human Rights Act: people with disabilities, sexual orientation, gender identity and expression, source of income (such as use of housing vouchers) and familial status (having children under age 18 in the household).

“For some residents these ads will appear to have blatant discriminatory language, whereas other readers may be surprised it is discrimination,” said Gustavo Velasquez, Director of the DC Office of Human Rights. “Unfortunately, housing discrimination still happens, and we hope these ads can educate both targets of discrimination and those who may unknowingly have discriminatory lending or rental practices.”

The advertisements, available on OHR’s website at ohr.dc.gov/page/fair-housing-resources, use discriminatory language including “No wheelchair users please!” and “Straight couples only!” to capture readers’ attention and educate them about housing discrimination. They also encourage those who believe they are victims of discrimination to contact OHR.

The advertisements are part of a larger OHR fair housing campaign made possible by a grant from the US Department of Housing and Urban Development’s Fair Housing Assistance Program through the Office of the Assistant Secretary for Fair Housing and Equal Opportunity. The grant – in partnership with the Equal Rights Center and National Community Reinvestment Coalition – enables OHR to:

·         Conduct data analysis regarding systemic lending discrimination in the District; and

·         Develop an awareness campaign to educate District residents about the right to fair housing.

About the US Department of Housing and Urban Development Grant

The work that provided the basis for this publication was supported by funding under a grant with the U.S. Department of Housing and Urban Development.  The substance and findings of the work are dedicated to the public. The author and publisher are solely responsible for the accuracy of the statements and interpretations contained in this publication.  Such interpretations do not necessarily reflect the views of the Federal Government.

About the District of Columbia Office of Human Rights

The District of Columbia Office of Human Rights (OHR) was established to eradicate discrimination, increase equal opportunity and protect human rights for persons who live in or visit the District of Columbia. The agency enforces local and federal human rights laws, including the DC Human Rights Act, by providing a legal process to those who believe they have been discriminated against. OHR also proactively enforces human rights in the District through Director’s Inquiries, which allow it to identify and investigate practices and policies that may be discriminatory.