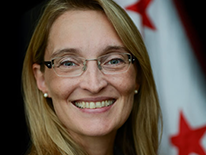 Mónica Palacio resumed her post as Acting Director of the DC Office of Human Rights in January 2021 and was confirmed by the Council of the District of Columbia as permanent Director in May 2021.

Director Palacio is a civil rights lawyer and a human rights advocate who has devoted her career to public service in the District for more than 30 years. Previously serving as OHR Director for six years, she oversaw thousands of civil rights investigations. The core mission of the agency was the mediation and resolution of cases when District residents faced discrimination applying for a job or housing, as well as defending workers fired or punished because of their race, age, gender or for having a disability. Under her leadership, the agency doubled in size and became a pioneer enforcement agency. Director Palacio led the enforcement of new laws protecting returning citizens, pregnant workers, and the LGBTQ community.

A leader in the fields of racial equity, coalition building, organizational systems change, and access to justice, she has worked side-by-side to effect positive change with DC leaders and service providers such as Bread for the City, La Clínica del Pueblo, Casa Ruby, the Ethiopian Community Center, the Consumer Health Foundation, Mary’s Center, the Latin American Youth Center, GLAA, and many other organizations in DC and other major cities.

Born in Bogota, Colombia, Director Palacio came to the U.S. as a young child and lived in New York City. In 1990, she moved to the District to attend the Georgetown Law Center and received her J.D. in 1993. DC has been her home ever since.