"Statistical and anecdotal evidence tells us transgender and gender non-conforming people are experiencing employment discrimination at very high rates, and this testing project confirms that unfortunate truth. It's vital that government, the business community and advocates work together to end this chronic injustice."

Qualified and Transgender:
A Report on Results of Resume Testing for Employment Discrimination Based on Gender Identity 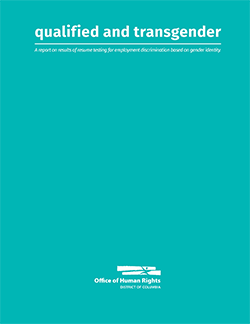 This report presents the findings from the first government-run testing project in the nation* to analyze how employers respond to resumes from applicants perceived as transgender compared with resumes of applicants perceived as cisgender. Previous surveys and studies, as well as anecdotal stories, portray a grim reality for many transgender community members seeking employment, with discriminatory practices punctuating nearly every stage of the interview process. These high levels of employment discrimination – both in jurisdictions with and without employment protections based on gender identity or expression – have disastrous consequences for the transgender community.

As the enforcement agency for the District of Columbia’s non-discrimination laws, which include protections based on gender identity or expression, the DC Office of Human Rights (OHR) conducted resume testing among District employers form February to July 2015. The findings show employers frequently offered interviews to less-qualified applicants perceived as cisgender over more-qualified applicants perceived as transgender. These results align with existing research indicating frequent discrimination during in-person interviews and in the workplace, and provide further evidence that government, the private sector and community organizations must develop comprehensive solutions to the issue of employment discrimination against transgender people.

Among the key findings in the testing project:

An anonymized review of testing results was completed by the OHR Director in October 2015, and enforcement actions will be initiated against employers in five tests in November 2015.

* It is possible other government-run resuming testing projects based on gender identity exist, but this is the first to be made publicly available to the best of our knowledge, as of October 2015.
** For determining rates of discrimination, only tests where one or more applicant(s) received a response were considered. This is in-line with best practices on correspondence testing.
Related Content:
Transgender and Gender Identity Respect Campaign
Safe Bathrooms DC
Twitter
Facebook
Mobile
Maps
Webcasts
RSS
Data
Subscribe
END_OF_DOCUMENT_TOKEN_TO_BE_REPLACED