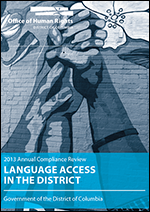 “Our program exists so all people in the District receive access to vital government services, no matter the language they speak.”
- OHR Acting Director Mónica Palacio

This report intends to inform elected leaders, government officials, advocates and the public about progress District government agencies have made towards full compliance with the requirements of the DC Language Access Act of 2004. All District agencies, divisions or programs – including government contractors and grantees – that provide services to the public, are covered under this Act. The act requires these entities to:  (1) collect primary language spoken by its customers; (2) provide  interpretation services for customers that demonstrate limited English proficiency or non-English proficiency; (3) translate vital documents; and (4) train personnel in public contact positions. Additionally, agencies with major public contact must : (5) complete a biennial language access plan; (6) designate a Language Access Coordinator; and (7) conduct outreach and public meetings with limited and non-English proficient communities.

This report summarizes the performance of 33 government agencies designated as having “major public contact” and records any growth in agencies compliance after a full two-year cycle under the new compliance assessment framework, implemented in 2012. As the final annual assessment before the tenth anniversary of the passing of the Language Access Act, OHR also prompts the discussion of around how the imminent shifts in demographics in the District, will effect compliance moving forward.