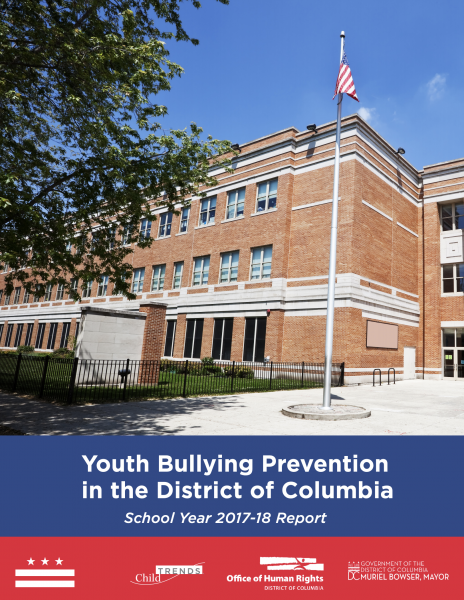 The District of Columbia Office of Human Rights (OHR), in partnership with Child Trends, issued the Citywide Youth Bullying Prevention Program's third report on the state of bullying in District public and public charter schools during the 2017-2018 school year. The Youth Bullying Prevention Act of 2012  requires schools and other youth-serving agencies including, but not limited to, government agencies, libraries, non-profits, and community centers) to adopt comprehensive anti-bullying policies, implement thorough reporting and investigation procedures, provide training for staff, and maintain and report incident data.

As of the close of school year (SY) 2017-2018, all local education agencies (LEA) in the District have adopted a compliant bullying prevention policy, except for two brand new schools that opened at the onset of the SY 2018-2019. This report highlights the work that OHR has done since the Youth Bullying Prevention Act (YPBA) was passed in 2012, making evidence-based recommendations, publishing citywide bullying data, outlining key findings and priority areas, and providing a detailed summary of each educational institution’s engagement with the YBPA.